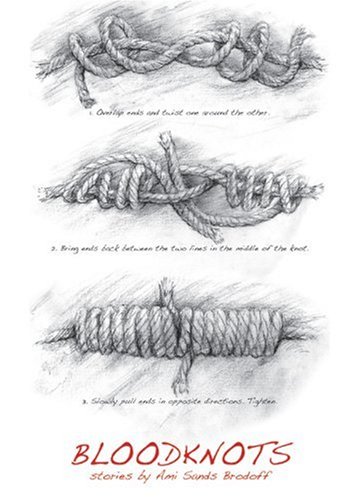 Bloodknots was short-listed for the 2006 Re-Lit Awards, the national prize for the best literary work from the Independent publishers in Canada.

The stories in Bloodknots, ferocious and powerful, are about family, both present and absent: about the threads that bind people together and the ones that unravel without warning.

Stubbornly original, fiercely honest, and imbued with a sensibility that speaks to the author's Jewish heritage, Ami Sands Brodoff writes with authority, passion, and razor-sharp detail about identity and the longing for a connection in the face of loss, abandonment, and exclusion. Her characters are giants and orphans, society's marginalized who struggle to free themselves from lives spent hiding in shadows. They walk the tightrope of survival, balancing between remembering and forgetting.

A troubled father who builds a shrine to lessen the pain of murdered children; a gay dollmaker who finds more comfort in his tenderly carved porcelain creations than in his dynamic but abusive lover; and an African-American grandmother, who abandoned her own daughter, who gets a second chance with her grandbabe. Though the characters come from varied backgrounds, they share a common quest in times of uncertainty and terror.

Written close to the senses, Bloodknots penetrates to the core.