About In Many Waters 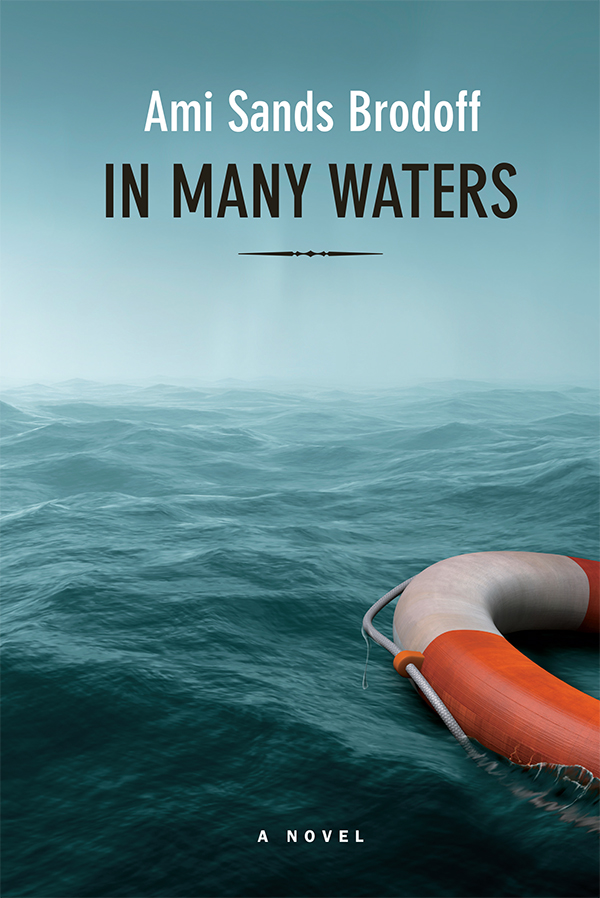 In Many Waters is the gripping story of three orphans whose lives intersect on the island of Malta during our current, urgent refugee crisis. For the first time since the Second World War, the number of refugees worldwide has surged past 60 million, according to the United Nations. Statistics, however shocking, leave one numb. The novel gets inside the story of one particular refugee, a young Libyan girl who seeks asylum on Malta. Zoe, a budding historian, comes to Malta with her younger brother Cal to learn more about their Maltese mother, as well as the mysterious circumstances surrounding their parents’ untimely deaths. The siblings’ well-mapped plans are derailed when Cal, who is a daily swimmer in the Mediterranean, discovers a girl floating in the sea, barely alive. The small, battered fishing boat on which she has journeyed from Libya to Malta capsized in a storm: Aziza is the sole survivor among the migrants. Meanwhile, Zoe returns to the site of her parents’ drownings and stumbles across a trail of clues which lead to the discovery of an unknown family member, unearthing a chain of life-changing secrets. In Many Waters mines the hearts and minds of characters in extremis, the unforgettable tale of the ways that we love and help one another and how the choices we make reverberate through generations. The novel dramatizes the Talmudic saying that if we save one life, it is as if we have saved the world.
BUY NOW
BUY NOW ON AMAZON.COM BUY NOW ON AMAZON.CA

“In Many Waters feels like a miracle. In her ambitious, cross-cultural examination of love in absence, Ami Sands Brodoff covers huge swaths of time and space with a remarkably light touch. The novel manages to be simultaneously local and global, domestic and political, intimate and vast. Brodoff’s portrayal of the hardship of refugees is timely, wise, and moving. I fell for each of these characters—especially Zoe and Cal--siblings orphaned by their parents even while their parents still lived. As soon as I turned the final page of this extraordinary novel, I wanted to read it again.”

Author of Mercury and The Flight of Gemma Hardy

“Orphaned at an early age, Zoe and Cal both long to understand and occupy their lives. When they visit the island of Malta, Zoe finds herself drawn into the several mysteries surrounding her parents’ lives and deaths. Meanwhile, Cal becomes involved with trying to rescue an illegal immigrant. As the narrative moves between Malta and Mexico, Marrakech and Montreal, past and present, Ami Sands Brodoff weaves their complex stories into a deeply satisfying and suspenseful narrative. In Many Waters is a splendid and very timely novel.”

Author of The Afterlife of Stars and Gratitude

“This captivating novel explores the unmaking and remaking of families, as well as the dark secrets and grim histories that can destroy lives—a few of which can be salvaged and redeemed by love and hope. In Many Waters is a profound and moving work.”

THE STORY BEHIND THE STORY

As a writer and as a reader, I am always interested in the story behind the story. Why does a writer write a particular book? About a decade ago, I was fortunate to have a writing fellowship in Valletta, Malta. At that time, I was working on a different novel, but while in Malta, I absorbed the culture, history, and crisis facing this extraordinary island. Though a refugee crisis was not on the radar here at home, it was very much an urgent situation in Malta, where thousands of refugees from North Africa flooded the tiny island, the closest point of entry to the European Union. Because of overcrowding, many were imprisoned in Detention Centres. I learned as much as I could about the crisis, talking to refugees, volunteers from the Jesuit Refugee Service who were working to help the migrants, as well as to the Maltese people, to understand their views. I read many testimonials of North African migrants who had been imprisoned in Detention Centres—for years—on their way to seeking asylum.

In addition, while living in Malta, a Catholic island, most famous for the Knights of St. John, I discovered a fascinating and secret Jewish history and minority on the island behind and beneath the more dominant history. I explored the Jewish sites and relics, talked to Maltese Jews, learning more about their own history and struggles, Jews who had once been slaves on Malta.

These seemingly disparate threads began to knit together: marginal people, forced from their homes, displaced from family and identity, seeking sanctuary elsewhere. People who had lost or been cut off from family, forming new families of their own making. The seeds of In Many Waters were planted.

As a fiction writer, in Canada, how do you think that you can contribute to the current international refugee crisis?

I’m a believer that literature can help to heal the world. A powerful novel is a gateway to opening a readers’ horizons. It’s vital to understand and empathize with the human stories. That’s my goal as a novelist.

We’re all familiar with the headlines: Violence has forced over 60 million people from their homes. According to the UN, the number of refugees and displaced people has reached the highest point since World War II. Here in Canada, I’m so proud of the fact that we’re in the process of resettling more than 30,000 Syrian refugees. (We are doing much more on behalf of refugees than the U.S.) But numbers are numbing and war reporting tends to capture images of the often nameless dead and injured, and the devastation of buildings.

In Many Waters takes readers deep inside the journey of one refugee, a young girl who is the only survivor on a flimsy, overcrowded fishing boat, who is rescued from drowning in the middle of the Mediterranean Sea. My novel is in some ways a reflection of what is happening in the world, in close-up. I hope to open readers’ hearts and minds, to both transport them to a place they’ve never been and to help them see what is happening right now in a new, immediate light.

Why did you write this particular story?

Back in 2005, I was fortunate to have a writing fellowship at The St. James Cavalier Centre for Creativity in Valletta, Malta. I absorbed the culture, history, and crisis facing this beautiful and troubled island. Though the refugee situation was not on the radar here at home, it was very much a crisis in Malta, where thousands of desperate, displaced people from North Africa flooded the tiny island, the closest point of entry to the European Union. Because of overcrowding, many displaced people were imprisoned in Detention Centres. I learned about the complexities of the crisis. I talked to refugees and to volunteers from the Jesuit Refugee Service who were working to help them. I chatted with Maltese people to understand their point-of-view. I read many testimonials of North African refugees who had been imprisoned in Detention Centres—for years—on their way to seeking asylum.

In addition, while living in Malta, a Catholic island, most famous for the Knights of St. John, I discovered a fascinating and secret Jewish history and minority on the island, behind and beneath the more dominant history. In fact, during the reign of The Knights of St. John (1530-1798), the only Jews (with few exceptions) were slaves in Malta. A prison to hold these Jewish slaves had been built in Valletta. Throughout the reign of the Knights, the islands were the last European refuge of slave traffic and slave labour. The plight of the Jewish slaves on Malta echoed the refugees’ current plight.

These interconnected threads knit together: marginal characters, forced from their homes, displaced from family and identity, seeking refuge and sanctuary elsewhere. People who had lost or been cut off from their blood family, forming and choosing new families of their own making. The seeds of In Many Waters were sown.

Why did you decide to write from American, Canadian, Maltese, and Libyan refugee points of view?

We live in a global world where we are all our neighbors’ keepers. My novel centres on three orphans, as well as a mysterious character whose origins are unknown, but are excavated during the story. Though the struggles of each of my characters have some commonality, there are also contrasts in what they face and grapple with in order to find out who they are and where they belong. I wanted to provide the rich texture of this multicultural, multiethnic world through the varied voices of each of my characters.

You touch on some huge themes in your writing: home, family, culture, religion, water and betrayal. What would you like your reader to take away from this book?

My own favourite novels are both intimate and vast. They are about particular characters whose voices, experiences and destinies burrow into the mind and heart of the reader, but also open out into broader, more universal themes. That’s my hope for In Many Waters. The takeaway: No one is a stranger.

Since you wrote your book, has anything changed? Would you add, or take away anything from In Many Waters?

The biggest change is that we are now facing a global refugee crisis and it is on everyone’s radar. Right now, the spotlight is on Syrian refugees, but there are also current emergencies in Libya, the Central African Republic, Iraq, and South Sudan, for example. The United Nations High Commissioner for Refugees (UNHCR) works in over 125 countries around the world in some of the most volatile and challenging places on the globe. Though the people come from different parts of the world, there is much commonality in their needs: food, water, shelter, a safe haven, and resettlement in a new home with all that entails. It’s our global priority now.

As far as changing my novel, I would not do so. We have news outlets to keep up with what changes day-to-day, but a good novel hopefully does not have a shelf life or expiry date. Though the book is dark, there are rays of hope. I would not dilute the depths of the dark, or the glimmer of the light in our many waters.

A CONVERSATION WITH NICOLE KRAUSS

In this podcast, Ami chats in depth with author Nicole Krauss, about her latest novel, Forest Dark in a conversation that took place at the historic Gladstone Hotel in Toronto this Fall. Sponsored by the Koffler Centre of the Arts.

TV SEGMENT "BY THE BOOK"

Author interview with Lana Richards of CogecoTV in connection with reading series organized by A Different Drummer Books of Burlington, ON – link will be posted when available.

THE MONTREAL REVIEW OF BOOKS

THE GLOBE AND MAIL

Ami is featured on the CBC Magic 8 Q&A.  8 writers ask her 8 different questions about her writing.

In Many Waters is cited in The 49th Shelf as one of the most anticipated titles for Spring, 2017. Quill & Quire also highlights the novel in its Spring Preview in a box on globe-trotting novels.

Brodoff who previously won a Canadian Jewish book award for fiction for The White Space Between, explores Malta's present and past...Of a boatload of refugees who set out to escape Gadhafi's Libya, only Aziza survives, pulled from Malta's surf by Cal Braverman. Cal and his sister, Zoe, are visitors to Malta, there to uncover their shattered family's hidden past....The Braverman siblings' parents are lost to them, but their parents' secrets are not. Methodical investigation uncovers tragedy and betrayal, but as painful as this is, it is the only path to reconciliation.  Cal and Zoe's quest allows the author to explore the long and often tragic history of the Jews of Malta....community born of calamity….