The White Space Between 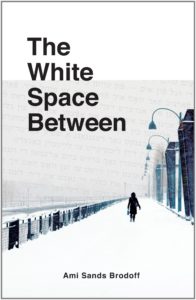 I believe the dead can inhabit us if their stories and lives are powerful. I wrote The White Space Between in honour and memory of my mother-in-law (my shviger in Yiddish), who was a survivor of the Holocaust and lost virtually all of her large, vibrant family in that atrocity.

Though there is nothing redeeming about the Holocaust or any atrocity, there is a shard of hope, healing, and faith in the act of writing.

As a woman, as a writer, as a woman writer, I hope to be a force of connection, a force of connection between the dead and the living, the past and the present, the lost and the found .  This gripping mother-daughter story and love song to Montreal reminds us that the memories and secrets we hide and bury are the very pieces that make us—and our loved ones—who we are.  A lyrical and page-turning journey that will burrow under your skin into your heart, lingering long after the covers are closed.

A GLIMPSE OF FAMILY HISTORY

My mother-in-law, Brana Hochova, was one of nine children born to a Hasidic Orthodox Jewish family in Solotvino, or Slatinske Doly, as she called it, a small rural village in the foothills of the Carpathian Mountains in Czechoslovakia. Her father, Mehel and her mother, Chanca lived in the front room of Grandfather Yankel’s house on Synagogue Street. Her father, Mehel, was known for his extraordinary height, 6 foot, 5 inches, and in fact, his last name, Hoch, means tall in German. My husband, Michael, is named for his grandfather Mehel and has, indeed, inherited the “tall gene” standing 6 feet, 8 inches in his stocking feet. ((No, he doesn’t play basketball! Yes, I am short!) Our children have also inherited the legacy of tall stature.

Brana was one of three children in her family who survived the Holocaust. The remainder of the Hochs were murdered at the hands of the Nazis.

My mother-in-law, Brana, was imprisoned in several concentration camps including Mauthausen and Buchenwald. She died at 52 years old, much too young, a legacy of the camps. One of her younger sisters, Sylvia, was hidden on farms by righteous Gentiles. One brother escaped into the British army.

All three of these survivors have now passed on.

Though my novel is not literally my family’s story, it is inspired by them, and written in honour of them and the millions of families like them: the hunted and the hidden, the lost and the found, the survivors and their children, and our children.

Some historians claim there are no survivors of the Holocaust if to survive means to come through unscathed.

But if we look at the word survive and take it apart: “sur” means over and “vive” to live. Survivors, their children, and their children’s children will likely re-live the experience, over and over and over again, both a blessing and a necessary burden. We will never forget to remember.

WHAT'S THE NOVEL ABOUT?

A family’s story lies buried in the soil of a graveyard in Prague, in the old neighbourhoods of Montreal, in the serenity of a small New Jersey town, and in the memory of Jana, a woman finally asked to bear witness.

Far from the landscapes of her earlier life, Jana raised her daughter, Willow, on the beautiful scrapbooks she kept of her own childhood in Prague, before World War II. But her stories end with the beginning of the Holocaust, and Willow knows little of her mother’s life during the war and its aftermath. Jana’s memories of this time are so guarded that Willow is uncertain who her father is—the answer left behind in Montreal, the city where Jana first settled after the war.

A gifted marionette-maker and puppeteer, Willow is a loner and artist who finds more comfort in her creations than in human relationships. Her mother’s struggle to spare her the pain of the past has left her incomplete and longing to find her missing history.

When both Willow and Jana find themselves back in Montreal, the past can no longer be hidden. New loves are found and lost loves rekindled, as mother and daughter journey to Prague to unearth the secrets that can no longer stay buried.

January, 2010: The White Space Between VOTED NOTABLE BOOK OF THE YEAR BY BELLETRISTA, CELEBRATING WOMEN WRITERS AROUND THE WORLD
Read the full review

This moving story offers the reader a promise of hope, a bridge between the past and the present, a story of family and love and finding a voice.
Read the full review here

The author's lightness of touch renders [The White Space Between] a story of hope; the pain of the past is remade into a force for change... That's the beauty of this novel... deeply powerful.
Read the full review

Radio Canada International Interview with Ami on The White Space Between: January 1, 2009.

Ami talks with Clelia of Open Book about her new novel, her inspirations and what's next.
Read the full review

The Montreal Review of Books

“In The White Space Between, Brodoff allows art to speak the unspeakable…she weaves myth and reality…in a powerful act of imagination. Those silent places often affect us most deeply. (The) senses are stirred on many levels.”
Read the full review

“You could say this is a novel about the Holocaust. You could say this is a story about secrets and the past, control and acceptance, love and emptiness. And The White Space Between is all these things, but, above all else, Ami Sands Brodoff has crafted a tale of ancestry and the familial bond. The relationship Willow has with her puppets is beautiful, and one of the greatest strengths of the novel.“
Read the full review on pdf

“The White Space Between, a new book by Montreal author Ami Sands Brodoff explores a mother's difficulty coping with memories of the Holocaust, and the effect her suffering has on her daughter. A presentation by Brodoff at Cegep Champlain St. Lawrence last Thursday provided an opportunity to speak with the author, students and staff about an event in history that is seemingly fading from the collective memory.“
Read the full review

"In The White Space Between, Ami Sands Brodoff depicts both the experience of the camps and that of the children of survivors. Engaging, from a daughter's perspective."

For Brodoff, it was her late mother-in-law Brana Hochova's cassette recordings - recollections of stories from Terezin, Mauthausen and Buchenwald concentration camps - that inspired her to write The White Space Between. "I'm interested in the contradictory emotions of a survivor and child. Women are often forces of connections. Our writing can be a bridge between the dead and the living, and the past and the present," she said.

“The novel examines the way that we create our identities from the stories we tell about our past, and questions the point at which the truth pushes its way out from the safe haven of denial. The structure of the narrative is well-paced and simmers gradually to a full boil."

American Academy of Arts and Letters Literature Award Winner, National Book Award Finalist and author of The Size of the World

"The White Space Between beautifully evokes one family's history and resilience, as it traces the mix of curiosity and self-protection that lead a mother and daughter into the past. The puppeteer heroine and her staunch and wry mother are wonderful, indelible characters, in a novel with a rare sunniness at its heart."

author of Infidelities: Stories of War and Lust

"The White Space Between portrays the fascinating struggle between forgetting and uncovering stunningly powerful and necessary memories, an extraordinary hide-and-seek game of personal and ethnic history. The novel abounds with wisdom and lyrical beauty."

author of Any Day Now

"Ami Sands Brodoff powerfully explores the haunted terrain of memory. Brave in its disclosure of family truths, her latest novel centers on a mother struggling to bury history, while her daughter yearns to uncover it, a journey rich with secrets and reckonings. Brodoff renders this world-a Montreal of eternal snow, a Prague of eternal childhood-as beautifully as a cherished old photograph, once lost, now found."

author of Psychoraag, winner of the PEN Oakland Prize

"The White Space Between forms a crystalline menorah in one's mind. With meticulous power, Brodoff evinces from the ash and soil of the Holocaust, the transcendent flame of hope, timelessness, and truth. A deeply moving and memorable novel."